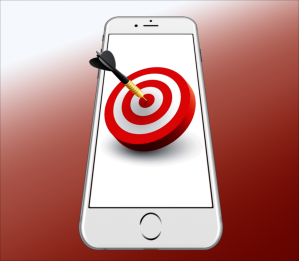 This is the second in a series of articles on getting into mobile app development. Feel free to look back at the first article, “Mobile App Development – Much Easier Than You Think“.

So, you want to get into mobile app development, and hopefully make a bit of money at the same time. But which app should to target? That’s quite a big question, and hopefully I can provide some advice based on my own experiences with my first ever commercial mobile app, Peak Scanner.

I just need a Brilliant idea!

With a brilliant idea, you’ve inextricably shortened your road to fortune – all you need to do now is code it up and launch it.

Hmmm… I see a problem though – the chances of you, me, or anyone coming up with a brand new brilliant idea – something that has not been done or thought of before – is slim. Here’s how slim: 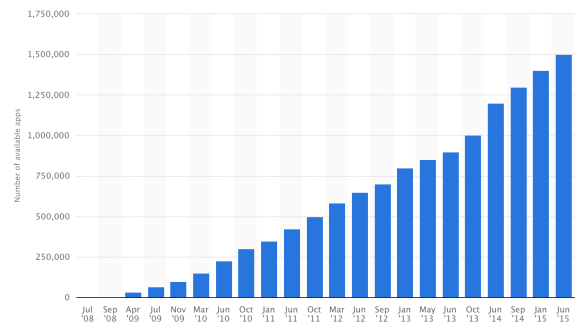 This chart was from last summer. If we extrapolate to Spring 2016 we’re looking at over two million different mobile apps available across all the stores. Crikey! That’s not only a lot of apps, but a lot of developers, and of course they’re all looking for the next brilliant idea, like you.

Now, I’m not saying you won’t have the next brilliant idea – I sincerely hope you do. But I want to show you a different approach – and one, particularly for your first app, is far better.

Really? Oh, cool. Because I’m right out of ideas. Pressure off.

It’s true though, you don’t have to invent something that the world has never seen. All you have to do is pick a subject area (could be anything), look at the apps already out there – perhaps some of those apps you are already using, and… here come’s the clincher: do it better!

Yup – that’s the secret. Well, it’s not the only approach, but it’s one that worked for me with my first app, and it could also work for you.

And that’s the thing about mobile app development, especially your first app. It all starts with you…

Choose a subject area that you are interested in

“What? That doesn’t make sense. My interest is in paragliding – way too niche! I want to choose an app idea that’ll quickly go mass market and make me millions!”, I hear you say.

That’s true, but this is your first app. And it’s going to be an up-hill battle to get it development – a lot of learning, a lot of bug fixing, a lot of headaches, a lot of exacerbation at times… effectively plenty opportunities for you to give up – so you should choose a subject area that is of deep personal interest to you. That way, when the going gets tough, you’ll still (hopefully) have the motivation to keep going to the end.

There’s also another reason for doing this – you are not guaranteed financial success – you may end up developing a great app, and it may never sell well. Two weeks ago, I launched my third app, Train Catcher. I (of course) think it’s brilliant, but there’s a ton of competition – many other apps doing a similar thing, and they’re all free – mine isn’t.

(Worth mentioning here that I’ll be writing a future post on how you can compete with free, using Train Catcher as a case study.)

But the absolute worst-case scenario is this – even if the app never sells, I’ll have an app that fully meets my own personal tailored requirements. Not a bad result for a worst-case, don’t you think? The same was true of my first and second apps, Peak Scanner and Stay On Track.

I’d urge you to consider the same approach, at least for your first app, therefore.

Is your app a mass market app, either in a particular country – or even globally? For example, a new kind of messaging platform. Or is your app targeting a niche market, like paragliding or camping holidays in France?

Mass market apps may seem like the fastest route to a billion dollar payday, but the more mass market the idea, the greater likelihood that many developers are already all over it, and therefore the  lesser the chance you have to shine above that – but that should not necessarily put you off, of course!

My first app, Peak Scanner, was certainly niche market. It allows walkers and hikers to find out the names of the mountains around them, just by pointing their phone. Even then, there were still four or five other apps doing something similar, but I still manage to achieve revenue of several £1000 a year from it.

My advice would still be to let your personal interests dictate at least your first app choice.

“Excuse me – but I’m trying to make money here! Why on earth would I want to give my app away?”, you exclaim! Don’t panic – I’ve not gone mad. It’s just another option open to you.

Here’s the thing, you put your app for sale, and if John Doe buys it for say £2.29 then you get that money less Apple’s 30% cut and in-country VAT. If the VAT is 20% then that works out to be £1.28. We’re not done yet though – as it’s income you’ll likely have to pay income tax on it too. And that’s it. For £2.29 John Doe has effectively bought the right to use your app on any device he wants, forever. You will get no more money out of him.

So, what to do. Well, you can accept that as I have done, and also accept that the average price of apps continues to fall (to I guess around the £1 mark, like iTunes songs) and you’re strategy is simply to sell to lots and lots of people – after all the market should be big enough. Price to highly though, and maybe only a few will buy. The good news (well, perhaps only perhaps marginally good news) is that you can change the price of your app as often as you like. This allows you to test the market, effectively trying to get to the point of maximum revenue before demand starts to tail off. You are allowed to make any paid app free at any time, but that’s a one-way journey – once an app is made free it remains free in the App Store forever.

Despite the above restrictions, there is a nice trick that some developers play, and introduce a “SuperDuperApp 2“ in the course of time. An entirely separate app in the store, but with a link to it from the original app stating, “Like what you’ve seen so far? Then you’ll love this new version!”. And when you release that app, although as far as the App Store is concerned it has a “2” postfix, you can still name the app without the “2” on the user’s phone.

And of course you can make your app completely free. This sounds like a daft way to make money, until you consider these two facilities:

If you are happy to allow ads to be shown in your app then you’ll receive revenue on those ad placements. Consider whether the screen layout would allow for this, and whether it might annoy the user. Needless to say such a facility really only generates revenue for mass market apps that a user might look at several times a day.

This is where your free app has extra features that can be enabled for a fee (just like an app purchase). All of the management is pretty much all handled for you by the App Store, so you don’t need to worry about that. You would need some extra code in your app to figure out what extra features/capability was purchased.

There are different types of in-app purchases too, so you have some flexibility here:

The user will be made aware of apps with in-app purchases prior to them downloading, and of course they decide not to download thinking that the app won’t really be useful unless the in-app upgrades are purchased.

If you’re thinking, “hey, I could time limit my app so they have to upgrade later”, unfortunately that seems to be a real no-no, and your app will not likely be approved as a result.

The thing about most apps these days is that they’re not fire and forget. You don’t just release V1.0 then sit back and watch the money roll in until your retirement (although I wish it was like that!)

The trouble is, that on this planet, everything changes – all the time. Whilst that’s a great thing in life, it’s a real headache for app developers. Maybe the online data source you’re using decides to change its API – or worse still, ceases operation? Maybe there is a new version of the operating system that breaks your code? Maybe there’s a new hero iOS device out that you’re app now looks rubbish on?

You name it, it’ll happen, and any inaction here will likely result in bad reviews from those affected – not good.

Not much you can do to mitigate any of this, so, just be prepared, that’s all.

Ah, this is good. Let’s get the show on the road then – here’s a blank sheet of paper and pen to get started: 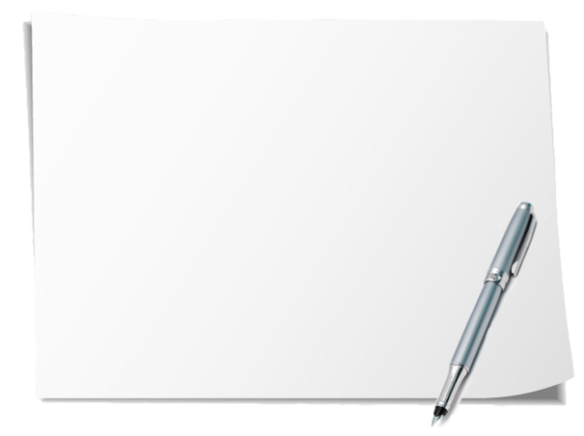 Hmmm, it’s not easy to get started from nothing at all, eh?

I have some good news for you then…

You Don’t Need to Start From a Blank Sheet of Paper!

Phew! Really? Yes, really. Find out why in Part 3 of this series:

Part 3: Actually Getting Started With Your App Development

This is the second in a series of articles on getting into mobile app development. Feel free to look back at the first article, “Mobile App Development – Much Easier Than You Think“.

2 thoughts on “Part 2: Targeting The Right First App to Develop”